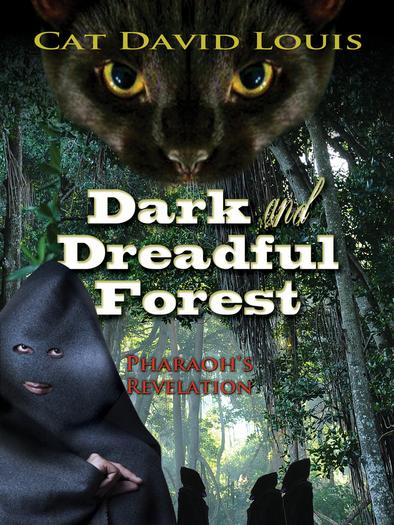 There was something witnessed deep in the woods that was better left unseen-- something chilling-- blood-curdling. Modern day Danvers Massachusetts is nearby, and sitting upon the unholy grounds of Salem's infamous"Witch Hunts" of 1692. And three centuries later the town still clings to a past it may never live down. But a black cat, like a shadow with nothing to cast it, also prowls these ancient woods. To what end, nobody's certain. Of what powers, nobody knows.

A creepy atmosphere, good vs.evil, bewitching revenge and a dying pharaoh's revelation, all play their roles in this wicked conspiracy-- and the game is deadly. What evil plottings brew in the Dark and Dreadful Forest?

You won't believe the answer until you've read the novel Dark andDreadfulForest: Pharaoh's Revelation by

NOW in  paperback and eBook!

​​​​​​Dark and Dreadful Forest: Pharaoh's Revelation by Cat David Louis is a well-written page-turning thriller, with a heavy dose of the paranormal; set in modern-age Salem Village-- Danvers, Massachusetts. I fell in love with the writing from the very first sentence. The construction of the sentences is reminiscent of the gothic style of old. Such a distinguished style of writing, I haven't encountered for a long time...  The author masterfully weaves preternatural , gothic setting, witchcraft, Egyptian mythology, and suspense together. The writing style is truly unique and well-crafted.

The unexpected writing set it apart and made it a truly amazing book... The dark atmosphere was well-sketched and convincing to boot. The prose is so acerbic the words jump off the page and make the story come to life... The author uses the literary device of a story within a story. This author sure can keep the pace of the story up, and the secrets that are revealed are exciting indeed... and the end  is breathtaking...a brilliant read. I rate this book a 4 out of 4 stars and recommend it as a great read!"--  Gali

​​Click here to read a thrilling scene from the book!